Daniel Maurice Ziegler is a musician, team coach and speaker and has been working with Benno van Aerssen since 2014. He speaks about innovation topics from a musician’s point of view and has been successfully working with non-musicians on all aspects of creativity for years.

The composer and jazz pianist was born in Neuss in 1973 and studied jazz and improvised music in Amsterdam/NL from 1993 to 1999. From 1999 to 2015 he directed the “rhythm & groove factory, school for jazz and popular music”. He leads several of his own ensembles, for which he writes the music, as well as for other free ensembles to big band lineups.

As a multi-instrumentalist, Daniel Ziegler can be heard on CD recordings and live. He expanded his musical teaching activities as early as 2003, when he began conducting creativity trainings for teams in companies. This led to the format “Team In Takt” and later to “Sounds Like Innovation” together with Benno van Aerssen. The two coaches applied their joint workshop concept, for example, in a two-day seminar with a major German automotive company.

Solo with his piano on stage, he talks about different aspects of innovation in his lecture “Composition – Improvisation – Innovation”. Using live musical examples, he talks about courage, risk, curiosity, idea generation and change management. He always keeps an eye on the European entrepreneurial landscape and reveals transfers of artistic creativity to business.

His contribution as verrocchio Fellow 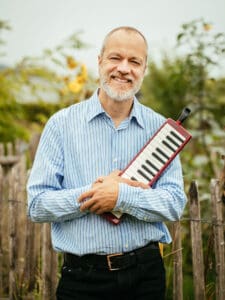 The creation of sounds and music has a lot in common with entrepreneurial innovation. Daniel M. Ziegler and Benno van Aerssen have developed the format “Sounds like Innovation”, a method that allows non-musicians to use the quality of music and improvisation. Sounds like Innovation has already been used in several verroccio projects and includes the idea of the verrocchio Fellowship in a particularly inspiring way.

Another form of artistic expression is photography. Here, too, Benno and Daniel have come together to devote themselves to a creative method: The stimulus image technique.

Stimulus pictures are photographs that stimulate new ways of thinking. They are a form of lateral thinking and inspiration. The format “Stimulus Picture Facilitator” shows as a self-study course everything there is to know about the technique – whether for facilitators, innovators, trainers or anyone who is looking for new ways of inspiration.

More about the "Stimulus Picture Facilitator"